Circle Pines, Minnesota-based, injection-molding company more than doubles its vendor report-card score in only two years by aggressively boosting its performance in energy conservation, packaging materials, health and safety audits, and other areas. 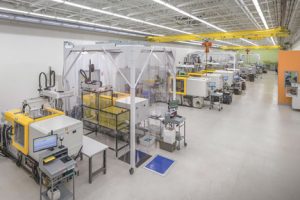 APPLE VALLEY, MINNESOTA — Few things in this world can be factually characterized as truly “unique” — as in “one of a kind,” “nothing like it anywhere else.” But for Eric Eichten, “unique” is an absolutely spot-on summation of the three-year-old Uponor Sustainability Report Card questionnaire process.

“We have had customers who’ve required this sort of vendor survey maybe one time — like when we are just starting a relationship,” says Eichten, who serves as customer relations lead at Advanced Molding Technologies (AMT) in Circle Pines, MN. “But for the most part, sustainability has been almost an afterthought. The focus Uponor has devoted to sustainability — and the value their management ascribes to it year-in and year-out — is not something I have seen elsewhere.”

A plastic-injection molder, AMT has been supplying Uponor engineered plastic pipe fittings for use in the latter’s crosslinked polyethylene (PEX) piping systems for more than two decades. In fact, AMT founder and owner Brett Nelson previously worked with Uponor (then known as “Wirsbo”) at another vendor before launching AMT in 1999.

Uponor Engineered Polymers category manager Loren Boerboom, whose Supply Chain team works with Eichten, describes AMT as a “very sophisticated company and a strong supplier. Technology-wise, they are top notch, and they adhere to our demanding standards for fittings.”

Nonetheless, three years ago, when AMT management received the inaugural version of the now-annual sustainability questionnaire, it came as a bit of a jolt, recalls Eichten. “I don’t know that ‘surprised’ is the right word, but I can’t say we were expecting all the questions it asked. The survey was an eye-opening experience, to say the least.”

That first year, 2017, AMT earned 12 points out of a possible 53 on the 23-question form, earning a “C rank.” The next year, the company more than doubled its total to 25 (again out of 53), raising its rank to “B.” (Survey questions are kept the same from year to the next, “so that we are comparing ‘apples to apples,’” says Boerboom.) In 2019, AMT increased its point total again, to 27, further bolstering its “B” rank.

Rather than regarding that first questionnaire as an imposition — let alone an abuse of the leverage a buyer might hold over a long-time supplier — AMT quickly embraced the process as “motivational,” according to Eichten. “We appreciate that Uponor has pushed sustainability to the forefront and helped us identify some opportunities that we have internally.”

Eichten notes that the plastics industry often gets “a bad rap from a sustainability perspective. As the owner of a plastics company, Brett is passionate about recycling. He stresses that our company must be good to the world — we cannot just take-take-take. The Uponor survey has shown us where exactly we need work, where we could improve.”

So many opportunities for improvement

AMT’s enthusiastic response to process and operational improvement is precisely what Uponor sought when it launched the survey in 2017. The concept was strategic, targeting only 50 of its 300 suppliers, with more than 40 participating. The overall targeted group accounts for approximately 80 percent of Uponor’s annual spend.

The survey would be a vehicle to enhance the company’s vendor relationships by forging a mutual commitment to sustainable manufacturing practices, according to Boerboom. “We clearly explain our focus and our vision with our ‘Sustainability Statement’ on the questionnaire’s opening page.” That statement reads: “We are committed to addressing the key issues of our time through innovations that help to reduce environmental impact.”

Calling for a spirit of partnership, the survey is structured to establish a baseline for each vendor-recipient. Participation is not mandatory, and there is no threat of lost business for a failure to submit, or a low score or a lack of year-over-year improvement. Still, “the process gives us a better feeling for the participating organizations,” Boerboom notes.

“It’s not just about product and price. It is also about the corporation and its core values. We want to work with suppliers with a similar vision for sustainability, as well as fair labor practices and other considerations.”

Boerboom reports that Uponor has experienced no negative feedback or even serious skepticism from its vendors. “None of them has been overly concerned with their responses. They know we want honest self-assessments, not something made up.

“Everyone understands that the push for sustainability isn’t going away,” he continues. “In fact, the requirement will only grow. So let’s get started with a tool that helps identify opportunities for improvement. If you cannot answer a question because your company lacks a program in that area, well, there’s a genuine opportunity for you.”

What most impressed Boerboom and the other members of his team was the proactive manner in which AMT used its survey results to pursue internal improvements. “They actively reached out to our company, holding meetings with our sustainability people to get ideas: ‘What can we do to align with Uponor when it comes to sustainability?’”

Over the past three years, AMT has achieved improvements in numerous areas, but five are particularly notable:

“We want to be a great injection-molding company,” says Eichten, who has worked at AMT the past seven years, five of them on the Uponor account. “When we had to answer that question ‘no’ in 2017, we also recognized it as a huge opportunity to improve. Brett and our HR people worked the better part of a year on the new statement,” which now lives in the company’s employee handbook.”

“We also noted equipment for replacement in the future, when it becomes feasible and makes the most sense,” says Eichten.

In AMT’s injection-molding process, large amounts of energy are expended heating the tool. An ongoing problem was the amount of heat lost during the process: Cut that heat-loss total, and a significant amount of energy could be saved.

“To reduce heat loss, we added insulator plates where we have a steel tool sitting on top of the steel platen of an injection-molding machine,” explains Eichten. “So, instead of heating the machine, most of the heat is now concentrated by the insulator on the molding tool.”

Although it is difficult to quantify the precise energy savings, Eichten estimates that this simple move to insulation has had a substantial, positive impact. “We believe that it saves us roughly 30 minutes at the startup of a tool,” he explains. “Then, over the course of a production run, we need less energy to maintain a set temperature in that tool.”

As for reducing air or waterborne emissions: “We use electricity to heat the water that heats the molding tools,” Eichten says. “Minimizing heat loss cuts our electrical consumption, and that, in turn, should reduce local power-plant emissions.”

“The plastic pallets are filled at our production facility,” says Eichten, “and the contents are transported to the second building for packaging, while the gaylords return to the first building for repeat refilling. We use the same cartons over and over.

”On the shipping-distance goal, AMT is helped by geography: Uponor’s Lakeville, MN, distribution center sits only 40 miles south on I-35W from Circle Pines. “In our weekly shipments there, we maximize truck efficiency by double-stacking product pallets,” Eichten remarks. “We also work with Uponor — and our other customers — to confine shipments within a specific time frame as much as possible. This helps boost shipment efficiency for us and our customers.”

“Essentially, it is a 5S process that becomes 6S because safety is involved,” explains Eichten. “Our audits go well beyond just making sure things are orderly, standardized and safe. We have made the once-informal process more rigorous, and each zone shows its results on ‘Visual Management Boards,’ located in the zones for everyone to see and read.”

An obvious question: AMT is a quality manufacturing company with a progressive owner and management team. Wouldn’t they have gotten around to improving these five areas — and others — on their own and without the Uponor survey?

“Probably,” responds Eichten. “But the survey certainly helped open our eyes to the opportunities for improvement and helped expedite the process.”

In the wake of these ongoing efforts, the forward-thinking AMT management has set for itself three major priorities for improvement:

AMT management recognizes that much of the “low-hanging fruit” in process improvement has already been plucked, and that future improvement projects will be larger, perhaps more complicated, and most likely more costly. As an example, Eichten points to replacing more than 80,000 square feet of fluorescent lighting in the two facilities.

“We want to substitute LED lights, and that is a much larger, more costly and difficult process to tackle,” he continues. “But the LED switch may also have greater impact in the long run in terms of energy savings. In addition, that switch would reflect well on the company and its commitment to modern technologies: a better, more efficient method that would represent a nice feather in our cap.”

In its aggressive move to embrace sustainability, AMT “still has a long way to go,” Eichten concedes. “We are aware of a lot of large projects out there that we definitely want to complete. But we are also looking forward to taking those next steps.”

About Uponor
We mean progress.


Apple Valley, Minn.-based Uponor North America strives to be the partner plumbing and HVAC professionals rely on for smart water and energy solutions. The company is helping to advance the construction industry through innovation, education and advocacy focusing on the defining issues of our time: water, energy and labor. An award-winning manufacturer of PEX piping and provider of plumbing, fire safety, radiant heating/cooling, hydronic piping, and pre-insulated piping systems, Uponor offers solutions for new construction, retrofits and remodels in the residential, light commercial and commercial markets.

Uponor partnered with Belkin International in 2016 to form Phyn, a new intelligent water company that is revolutionizing the way consumers interact with water and helping solve major challenges facing the global water supply. Recognized for best-in-class manufacturing, sustainability, economic development and as a top workplace, the Uponor group of companies employs more than 3,800 worldwide. Uponor’s global headquarters are located in Vantaa, Finland. uponor-usa.com 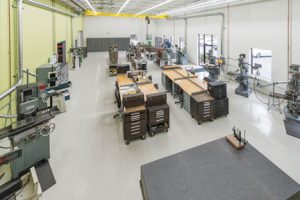 Tool room: Where AMT’s injection molds are cleaned and maintained for our customers

All in a day’s reward:
Uponor Pro Rewards

Discover how to fill an
Uponor Manifold
in Radiant Heating